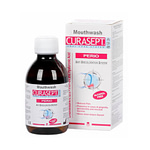 Curasept ADS (Anti Discolouration System) is an anti-bacterial mouthwash, containing a patented, clinically tested system which drastically reduces chlorhexidine (CHX) staining on the teeth and taste distortion. It contains 0.12% chlorhexidine digluconate, an antimicrobial which works by reducing the amount of bacteria (germs) in the mouth and helps reduce swelling, redness and bleeding gums. It is not an alternative to effective regular tooth brushing and flossing or interdental brushing but can help reduce inflammation.

You can buy Curasept Perio Mouthwash from Keith Nelson directly.
For further information or to purchase any of our products, please call reception on 09 378 0877 or email us

For emergency
cases please
call us.

Call us today or click
below to book an
appointment.